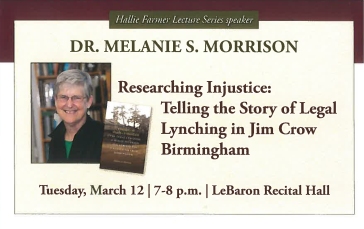 Dr. Melanie S. Morrison will recount what compelled her to research the case of Willie Peterson and will discuss the challenges inherent in unearthing largely forgotten stories.

Morrison’s newest book, Murder on Shades Mountain: The Legal Lynching of Willie Peterson and the Struggle for Justice in Jim Crow Birmingham, will be available for signing and purchase. This riveting account of Jim Crow-era injustice exposes how courtrooms could function like lynch mobs when the defendant was black. Through scrupulous investigation of primary sources, Morrison sheds new light on the struggle for justice in Depression-era Birmingham. Murder on Shades Mountain is a testament to the courageous predecessors of present-day movements that demand an end to racial profiling, mass incarceration and the criminalization of black men.

Morrison is found and executive director of Allies for Change, a national network of Social justice educators. She has a Master of Divinity from Yale Divinity School and a Ph.D. from the University of Groningen in the Netherlands. She is the author of The Grace of Coming Home: Spirituality, Sexuality, and the Struggle for Justice and her writing has appeared in numerous periodicals.

For information about disability-related
accommodations at the University of Montevallo
montevallo.edu/disabilityaccess